Airplay youngsters pay their own poppy tribute for Remembrance

As the nation stopped to mark Remembrance Day this year and the 100th anniversary of the end of the First World War, members of the RAF Benevolent Fund’s Airplay youth support scheme took time to pay their own tribute.

Airplay members at RAF Digby came up with the idea of a Recycled Poppy Project following a project on the environment which looked at how society could better recycle waste.

The group had also been involved in the RAF100 Baton Relay, which visited the station earlier this year, and decided to commemorate the RAF’s centenary as well as the 100th anniversary of the end of the First World War.

So, the group set to work collecting plastic bottles and asking everyone on camp to donated their bottles. Around 500 bottles have been donated so far. The bottles had to be washed and cut up to create the flowers which were then spray-painted red.

Then, in tribute to the two centenary milestones, the poppies were arranged into a large ‘100’ shape. The display was mounted and the Station Youth Worker laid the emblem in place of a wreath on Remembrance Sunday. 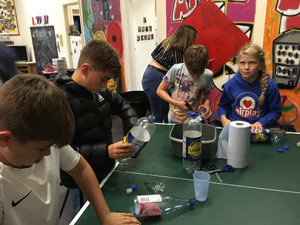 Airplay Poppies in the Garden of Reflection

Youngsters at RAF Cosford’s Airplay group joined forces with the station’s Padre to create a poppy display in the station’s new Garden of Reflection.

The group put a lot of thought into the design of the poppies, creating them from recycled plastic bottles, including different sizes to reflect the equality and diversity within the RAF. The poppies also reflected the soldiers’ uniforms of the time, in a visual tribute to their sacrifice.

Each of the Airplay members had the chance to sponsor a fallen soldier from the Cosford community by signing their name on a poppy and making a donation. Youth worker Tanika McCurdy said the aim was to teach young people about celebrating difference, honour and their community’s history. All the community were encouraged to take part to sponsor and funds raised were given to the Fund and the Chaplaincy garden.

The poppy wall will be complete by the end of November.

RAF Wittering Airplay group members were delighted to join with other community and youth groups to take part in the Remembrance Day parade around the village. Usually a small event, this year’s Remembrance commemorations in Wittering were extended to reflect the commemorations of the end of the First World War.

Station Youth Worker Sharon Pollard said the group had been looking forward to their contribution and community interaction and integration.