More than 100,000 well-wishers flocked to the Welsh seaside town of Llandudno on Saturday to say a big thank you to Britain’s military at this years Armed Forces Day National Event.

Joining the parade watched by The Princess Royal, Her Royal Highness Princess Anne and Prime Minister Theresa May were 100 servicemen and women from RAF Valley. Station Warrant Officer Kevin Beattie was keen to recognise the support given to the Anglesey station. He said “I’d like to thank the local communities of Llandudno and Anglesey for bringing RAF Valley into the family and making it Happy Valley.” 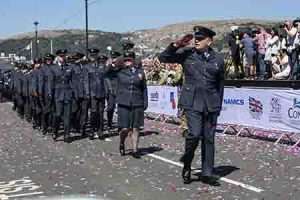 Also from RAF Valley, Medic SAC Cassie Screen gives up her spare time to save lives in the nearby mountains of Snowdonia as a member of the Mountain Rescue Team. She said, “The Armed Forces are an incredibly positive representation of security for the UK and also for playing its part in doing good for the community. It’s great then to have this day where everyone can come and get involved and we can truly mingle properly.” 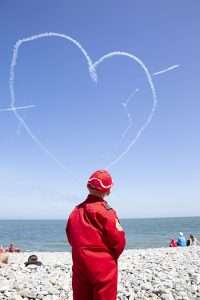 As well as enjoying flying displays from the Red Arrows, the Battle of Britain Memorial Flight and the Typhoon Display Team, visitors were also given an insight to the RAF with the help of Regulars, Reservists and Air Cadets who manned displays in the RAF Village.

Visiting the RAF recruitment tent, seventeen year old Abby Rapson from Penrhyn Bay (story image), whose ambition is to join the RAF Police, said: “I’d like to tell everyone in the Armed Forces thank you very much for being there and for being there for us as a community.”

Lifelong Red Arrows fan Kelly Spencer described the flying display as perfect but also had a message for all members of the Armed Forces. She said, “You do a fantastic job and I’m just really proud of you all. Keep up the good work.” 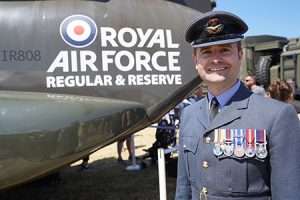 Wing Commander Dave Melmoth has spent the past ten months planning for the event with the Royal Navy and Army. He said: “It’s been a real privilege for us to represent the RAF on this Armed Forces Day National Event. I think it’s important for us to support Armed Forces Day. It’s a way of showing the public what we can do, but more importantly, it’s a way for the public to say thank you to the Armed Forces.

“It’s been wonderful that the people of Llandudno and the surrounding area have been able to see our people. It’s been a really great day for everybody and I want to say a great big thank you to all the Royal Air Force people who have come here today.” 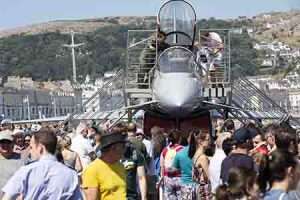