Why did the Armed Forces introduce a new pension scheme in 2015?

In 2010 the government assessed that public sector schemes were becoming increasingly unaffordable as people were living longer resulting in pensions being in payment for longer than forecast. Lord Hutton’s Independent Public Service Pensions Commission was convened to make recommendations on reforms to all public service pensions schemes to ensure that they were affordable and sustainable, and also fair to scheme members and the taxpayer and these formed the basis for Armed Forces Pension Scheme 2015 (AFPS 15).

How is the AFPS 15 calculated?

AFPS 15 pension entitlement starts accumulating from your first day of paid service and provided you have completed at least 2 years qualifying service you will be eligible to receive a pension. AFPS 15 pensions are calculated using a system called Career Average Revalued Earnings (CARE), rather than being based on your final salary as with previous schemes. Every year, the MOD adds an amount equal to 1/47th of your annual pensionable earnings for that year into your ‘pension pot’, this is known as the accrual rate. To ensure your ‘pension pot’ retains its value it is increased each year by the Average Weekly Earnings Index, which for 2018 was 3%. This growth is known as indexation and is similar to money in a bank account earning interest each year. This process is repeated every year until you leave the Armed Forces with the total value of your ‘pension pot’ at that point representing what you would receive as an annual pension. The diagram below illustrates how AFPS 15 works.

When will I receive my pension?

If you leave the Armed Forces having completed at least 2 years qualifying service, but before AFPS 15’s Normal Pension Age of 60, you will be entitled to a deferred pension which is paid at your State Pension Age in addition to your State Pension which is currently £8,545.50 p.a. After leaving service your deferred pension will increase annually in line with the Consumer Price Index (CPI) to ensure that it retains its value up to the point it is claimed. Providing you are aged 55 or over you can apply to have your deferred pension paid before your State Pension Age, subject to an actuarial reduction, which means your pension payments will be reduced in value to reflect the fact that the pension will be paid over a longer period. For those who serve to the Normal Pension Age of 60, so long as they have at least 2 years qualifying service, they will be entitled to claim a full pension immediately. AFPS 15 will not automatically pay you a pension lump sum, however, you can create a tax-free lump sum by ‘surrendering’ a part of your annual pension. This is known as commutation. HM Revenue and Customs currently allow up to 25% of your overall pension benefits to be taken as a lump sum. The commutation rate is fixed at 12 to 1; so for each £1 of your pension you give up, you will be ‘buying’ a lump sum of £12. Once in payment, your pension will increase annually in line with CPI.

What is an Early Departure Payment?

In addition to a pension, you may also be entitled to an Early Departure payment (EDP) which is an additional benefit which is entirely separate to your pension. The purpose of the EDP is to retain Regular personnel in Service through to at least age 40; to compensate them for the fact that a full pensionable career to age 60 is not available to the majority and to assist Service Personnel transition to civilian life. You will need to serve as a Regular for 20 years or more and reach at least age 40 to be eligible for an EDP. This is known as the 20/40 EDP point. The EDP is paid as a tax-free lump sum equivalent to 2.25 times your deferred pension, plus a monthly taxable income of 34% of the value of your annual deferred until State Pension Age. For each whole year served beyond the 20/40 EDP point, the value of the EDP will be increased by 0.85% of your deferred pension. You can also choose to ‘give up’ your full EDP lump sum to increase the monthly EDP income. The income stream is paid at a flat rate until age 55 when it is uprated to take account of CPI growth since the date of exit and is then increased annually by CPI. The diagram below shows how the EDP works. 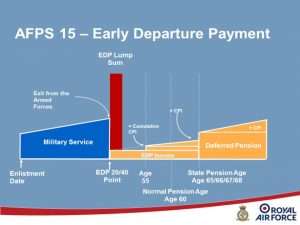 What is a Resettlement Grant?

The Resettlement Grant is paid to Regular members of the Armed Forces who leave after 12 or more years’ service, but before they qualify for any other form of immediate pension or EDP benefits. It is not linked to your pension entitlement but it is intended to help you adjust to civilian life.

What pension benefits do dependants get?

If a member of AFPS 15 dies, either in Service or after leaving the Armed Forces, benefits may be paid to a nominee, spouse, civil partner, eligible partner or eligible children. Benefits may consist of a tax-free lump sum (in some circumstances) and a taxable pension for life.

What about the pension I built up on AFPS 75 or AFPS 05 prior to transferring to AFPS 15?

The benefits you have already built up in previous pension schemes are known as ‘accrued rights’. These rights vary from scheme to scheme, but the value of pension benefits earned up to the introduction of AFPS 15 are protected. This includes, where applicable, the AFPS 75 Immediate Pension and lump sum, AFPS 05 EDP and lump sum. These benefits will remain payable at the time they were expected to be paid, linked to your final pensionable pay/ rank at the point of leaving the Services, not the salary and rank at the time of transfer to AFPS 15.

Have I lost money by moving to AFPS 15?

AFPS 15 is still one of the very best pension schemes available; however, its overall value is lower than AFPS 75 and 05 because of its different structure and to ensure it remains affordable. Unlike virtually all other schemes it is non-contributory, so Service personnel pay no money towards their pensions. Other public-sector workers typically have to pay an amount between 8.5% and 13% of their salary towards their pensions. The AFPS 15 accrual rate (the proportion of pay that goes into a pension) is 1/47th of annual salary, which is the best accrual rate across the public sector, and is higher than that for AFPS 75 and AFPS 05 because of the Career Average rather than final salary structure of the scheme.

How do I find out how much my pension is worth?

The Armed Forces Pension Calculator is an excellent resource which enables you to forecast your potential pension income based on anticipated promotion dates, the date(s) you may be considering leaving the Service and it provides a range of indexation values to show how much a pension may grow over time. You can access the Armed Forces Pension Calculator via mod-abc.co.uk. Every year around your birthday you will also receive a Benefits Information Statement that will inform you of the value of your benefits on your birthday, but it is not a forecast of the total benefits you will receive if you serve to the end of your current engagement. A free pension forecast that provides these details is available annually from Veterans UK, the form can be accessed via the Veterans UK website

Where can I find out more about AFPS 15 and my accrued rights?

Please note: The links below are to be copied into the MOD’s internal network (ie inaccessible to family members)

DIN 2013DIN01-205 Pension rights accrued for officers in AFPS 75 who commissioned from the ranks defenceintranet.diif.r.mil.uk/libraries/corporate/DINSpersonnel/2013/2013DIN01-205.pdf

This article is part of the Winter edition of Envoy magazine. If you’d like to receive your own quarterly copy of Envoy, it’s free. Simply sign up online.