“I don’t think we realised the importance of that day at the time.” Was the recollection of 98-year-old Joan Fanshawe, attending a special service at Westminster Abbey on Battle of Britain Sunday.

Known in 1940 as Aircraftwoman 2nd Class Joan Moxon, Women’s Auxiliary Air Force (WAAF), Joan served as a plotter at 11 Group, moving counters around a large map table that represented what was happening in the skies over the south of England. Joan was on duty on 15th September, the day Prime Minister Winston Churchill visited the RAF Uxbridge operations room where she worked. “That was the very day he said about The Few and it turned out to be Battle of Britain Day. Today I realise just how important that day was, it was the turning point.” Said Joan.

On Sunday 15th September 1940, the Luftwaffe flew more than 1,000 sorties over England during daylight hours. Joan said, “We were running out of aircraft at that time. There were so many plots on the table, you could hardly see it.”

Also, attending the Service of Thanksgiving and Rededication was Gladys Eva. During the Battle of Britain, Gladys served in the Filter room at Bentley Priory, plotting enemy aircraft from take-off until they had crossed the channel. She said, “Looking back, it was an incredible time. We knew exactly where the Germans were and when they were coming over. Without the filter room it would have taken much longer to win the war. There’s no doubt about that.”

After four months of constant fighting, the Battle of Britain drew to a close in October 1940 as Germany changed its strategy to focus on night bombing of Britain’s major ports and industrial centres. Fewer than 3,000 aircrew from Britain, the Commonwealth and its allies, together with the men and women who had supported them, had repelled the Luftwaffe and averted invasion. 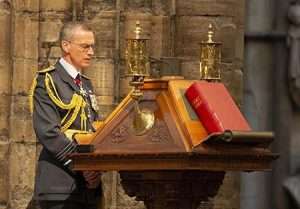 Chief of the Air Staff, Air Chief Marshal Sir Stephen Hillier (pictured above) explained the importance of remembering a battle that took place 78 years ago.

“Going through my mind was the fact that we are still recognising the achievements, courage and the sacrifice of The Few and those who saved our nation during the Battle of Britain. But also, what goes through my mind is connecting that to what we do today. We remain a Service of outstanding men and women who continue to do fantastic things, really busy on operations around the world and continue to play their part in defending our nation and protecting our interests around the world.” 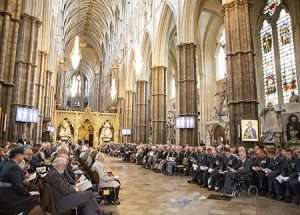 Reflecting on the service which was attended hundreds of serving RAF personnel, veterans and their families, Gladys said, “I’ve loved today. I’ve been here every year that we’ve had one. I haven’t missed one yet and I’m nearly one hundred.”