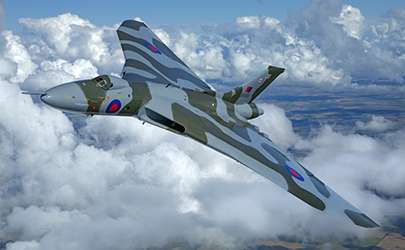 The deadline has been extended to be a part of history and commemorate the Diamond Anniversary of The Spirit of Great Britain.

Those wanting to be a part of the history of the last airworthy Vulcan bomber have a few weeks left to have their name added to her wing.

The Vulcan to the Sky Trust, the charity responsible for XH558, the last airworthy Vulcan that stopped flying in 2015, is giving people until July 5 to have their name placed under the wing of the iconic aircraft, named “The Spirit of Great Britain”.

Dr Robert Pleming, who leads the charity, said: “We know how much it means to supporters to have their name under the wing and become a part of XH558s history.

“In the current challenging times resulting from the COVID-19 pandemic, we have decided to extend the deadline of our Names Under the Wing Campaign by a few weeks, until the first week of July, to align it with the Diamond Anniversary of XH558 becoming the first Vulcan B.Mk2 to enter RAF Service.

“Our original intention, when we launched this campaign, was to unveil the name plaques under Vulcan XH558’s delta-wing on 1 July, commemorating the Diamond Anniversary. However, the constraints imposed as the result of the COVID-19 pandemic, which caused the suspension of access to XH558, mean that this is not currently possible.

“As soon as we have a new date agreed to fit and unveil the plaques, based on the relevant government guidance and protective measures, we will inform supporters of this via our email communications, and also advise them when our access programme will resume so that they have the opportunity see their names on this remarkable aircraft.”

The Vulcan to the Sky Trust have asked for donations of £30 per name to celebrate the Diamond Anniversary of the remarkable aircraft.

The RAF’s Vulcan bombers carried Britain’s strategic nuclear deterrent during much of the Cold War. Whilst the Vulcan fleet’s operational service ceased in 1984, XH558 flew on in the display role until finally retiring from RAF service in 1993.

In 1997, Dr Robert Pleming and a small team started to investigate the possibility of returning Vulcan XH558 to flight. Ten years and £7million later, she made her first post-restoration test flight in October 2007. It was an incredible triumph of British engineering, public support and determination. XH558 flew for eight further display seasons that no-one thought they would ever see, thrilling an estimated 20million people across the UK.

For further information or to add a name to this iconic aircraft visit www.vulcantothesky.org