There’s been some magic aviation moments over the last two weeks, from the epic RAF100 flypast to the spectacular RIAT 2018. Now it’s the Imperial War Museum’s turn on 22 and 23 September! IWM is proud to be the last official RAF100 air show of the season. Chosen because of Duxford’s important 100 year history, and are thrilled to announce its RAF aircraft flying this September.

Only seen before at RIAT 2018, there’s a chance to see the F-35B Lightning II, Avro Lancaster and Tornado GR4 making history in the skies.

Visitors will also witness the RAF demonstrating its air-to-air refueling capabilities with the Voyager KC Mk.2 tanker taking to the skies alongside an immense Atlas A400M transport aircraft and two Eurofighter Typhoons.

Book now to be part of the final celebration of 100 years of RAF history and Duxford’s ‘Finest Hour’ on 22 and 23 September.

Every ticket bought helps Imperial War Museums to preserve this 100 year old site and the stories of bravery from the men and women who lived and served here. 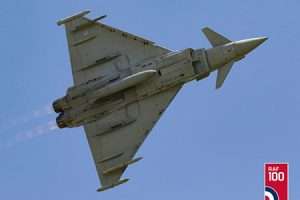