In late April 2018, ten members of 230 Sqn headed to the Far East for an ambitious Staff Ride in Thailand and Singapore. The exped was split into two phases, both aiming to examine the history of 230 Sqn during its centenary year, within the context of the Fall of Singapore in 1942 and the infamous suffering of PoWs that followed.

Congregating in the Sqn History room, all ten members of Ex EASTERN TIGER settled in for the first ‘stand’ to be delivered.  Sgt Matt ‘Fricks’ Fricker talked about 230 Sqn’s operations in the Far East and its contribution to the campaign in Malaya.  He detailed the history of the flying boat which played a key role in providing Air Power in the strategically important Far East, and more recently anti-submarine warfare and anti-piracy ops.  Though military flying boats are now largely obsolete, Fricks identified more contemporary platforms that have fulfilled this role, including the gone but not forgotten Nimrod and forthcoming P-8 Poseidon. He then looked at 230 Sqn today, including the support its Puma crews provide to Op TORAL and recent employment in Humanitarian Aid and Disaster Relief operations, and potential uses of rotary capabilities in the future.

Following this illuminating stand, we completed our final pre-journey checks and took the obligatory pre-departure group photo.  After a long night flight to Bangkok we wearily navigated ourselves and our baggage across the heaving city to the small, local train station of Thon Buri.  Here we enjoyed our first street food experience, attempting to communicate in true British fashion by pointing at pictures and hoping for the best – whatever was served was generally delicious and only cost £1!  The train journey north to Kanchanaburi was an exciting if humid experience, with no glass panes in the windows and the only source of aircon being the OIC’s snoring!  The scenes from the train were beautiful, crossing lush open fields and patches of jungle dotted with traditional temples throughout the 3 hour journey.

The town was rapidly filling up with military tourists, particularly Australian veterans and enthusiasts making the journey for the ANZAC Day commemorations.  We shook off the long journey in the hotel pool, and over dinner and drinks on the bank of the River Kwai.

An interesting hotel breakfast of prawn dumplings and pork porridge started the day, before we set off for the principal ‘Death Railway’ museum.  Kanchanaburi is known for being one of the most southern stations of the infamous Thai-Burma Railway, built with PoW and Asian slave labour under the cruel control of the Japanese.  In the oppressive humidity and heat, we were all shocked and deeply moved by the appalling treatment endured by the PoWs.

Having visited the excellent museum, Chf Tech Kurt Winship delivered a superb stand examining the Japanese brutality relating it to resilience training today, highlighting how the culture of honour and history of the Samurai influenced the viciousness inflicted.  That afternoon, we visited the ‘Bridge on the River Kwai’ made famous by the 1957 film of the same name (though not necessarily the same river!).  Many of the railway bridges were bombarded by the Allies to prevent the movement of Japanese goods, thus adding to the PoWs’ desperate suffering.  The day concluded with a further stand discussing the use of intelligence by both the Allies and the Japanese, covering the Allies’ pitiful failure to gather and exploit intelligence material, in stark contrast to the Japanese, and how we endeavour to do so today using RAF capabilities. 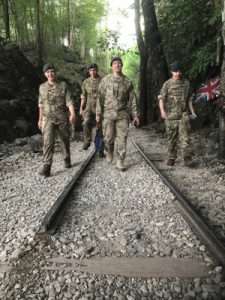 The following day – well before dawn – we left for the ANZAC Day Sunrise Ceremony in the ‘Hellfire Pass’.  This area of jungle still has evidence of the original railway which ran through an 8-metre deep cutting in the rock, hewn by hand. The dawn service was led by military personnel from Australia and New Zealand, and attended by two ex-PoWs who laid a wreath to honour their fallen comrades. We then attended a memorial service at the Commonwealth War Graves cemetery back in Kanchanaburi, at which I had the honour of laying a wreath on behalf of the UK.  We were invited to join our Australian counterparts for a BBQ, to socialise with members of HMAS ANZAC, undergoing a South-East Asia Deployment.  However, we could not linger long as we had to swiftly depart for Phase 2 of the Force Development adventure!

An arduous journey, with all 10 of us and our baggage cramped into a 10-seater mini-bus, took us back south to Bangkok.  With everyone thankfully reporting fit and well the following morning we caught our flight to Singapore, on the southern tip of the Malayan Peninsula.  The impressive skyline of Singapore formed the backdrop for another stand, evaluating the Allied defence of the peninsula in 1941/42 – a gross failure of Joint and Combined operations – as well as touching on the Sqn’s own service in the empire’s ‘Jewel of the East’.

More was learnt about 230’s ties with the country during a Defence Engagement day organised by the High Commission’s Defence Section staff, enhanced by stories from two RAF veterans who had served at RAF Seletar post-war.  The first stop was to the site of RAF Seletar, where many of the old buildings are still standing including the original Officers’ Mess and SHQ.  We briefed, and were briefed by members of the Republic of Singapore Air Force with whom the UK enjoys a strong and long-standing relationship.  From Seletar we crossed the city to the Commonwealth War Graves Commission cemetery at Kranji. 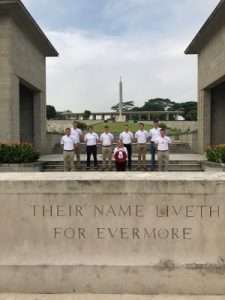 There are thousands of Allied graves at Kranji, with tens of thousands more names immortalised on the walls of the memorial, including that of Wg Cdr Nicolson VC DFC, the only Fighter Command recipient of the VC (earnt during the Battle of Britain, returning to his burning cockpit to down an enemy fighter) who was shot down over Burma.  During the cemetery visit Flt Lt Mark ‘AC’ Austin-Carroll delivered a stand on the Air Power evident during the conflict in the Far East (mostly Japanese!), detailing the attributes and constraints of Air Power that endure today. 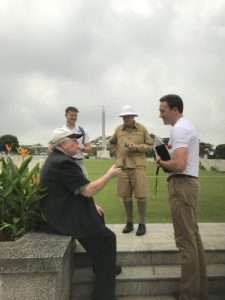 A wreath was laid and a minute’s silence was followed by the reading of a poem by 230 Sqn and RAF Seletar vet David Lloyd.  This sombre moment was reflected on whilst enroute to the Tiger Brewery, where the staff at our spiritual home were keen to learn more about 230 ‘Tiger’ Sqn.  The Sqn’s link to Tiger Beer goes back to 1937, when HM the King approved the proposed Sqn crest, which had been inspired by the beer’s bottle label; the tiger under the palm tree has been on our crest ever since. 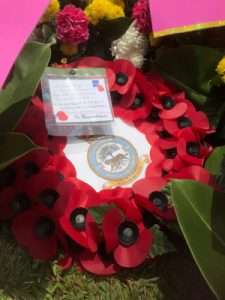 During the final few days we visited the Fort Canning ‘Battle Box’ bunker which housed the Allied HQ during the invasion of Singapore itself.  This was where the infamous Lt Gen Arthur Percival took the fateful decision to surrender Singapore to the Japanese in the hope of saving the lives of thousands of troops and civilians; a great debate ensued as we considered the challenging question of whether he did the right thing.  We then visited the Ford Factory museum, home to the Japanese HQ and where the terms of the unconditional surrender were negotiated, resulting in over 80,000 Allied PoWs – “the worst disaster and largest capitulation in British military history” (Churchill).

The Staff Ride concluded with a visit to the defences at Fort Siloso, some of the only remaining defences on the peninsula (and next door to the hotel at which Donald Trump and Kim Jong-un met the following month!).  The opportunity to play some beach cricket presented itself prior to our final stand presentation of the trip; this was delivered looking out on one of the busiest shipping channels in the world, the Malacca Straits, the key reason for Singapore’s strategic importance in WW2.

The Sqn’s motto – Kita Chari Jauh – translates as ‘We seek afar’, and we certainly went afar on this occasion!  In doing so we discovered fascinating military history, rich Sqn heritage and numerous great characters and places. Through the stand presentations we related the Fall of Singapore, and subsequent enslavement of so many of our predecessors, to contemporary operations; just one of the many ways that EASTERN TIGER delivered an abundance of personal and professional development for all of us fortunate enough to take part. 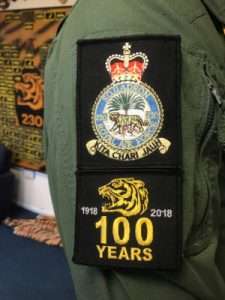