Hawker Typhoon is back on display in Hangar 3

The Hawker Typhoon was designed by Sydney Camm as a successor to the Hawker Hurricane. Powered by the most powerful engine available at the time, the Typhoon was faster than any RAF aircraft at low altitude. However, the thick wings caused air flow problems, especially at higher altitude, limiting the Typhoon’s suitability as a fighter aircraft. Undaunted, it found a new purpose as the RAF’s main ground-attack aircraft. Armed with four 20 mm cannons and an array of bombs or rockets, it proved to be a constant menace to Nazi German troops, from Normandy to the heart of the Reich. More than 3,300 ‘Tiffies’ were built and at its height, it was used by 26 RAF Squadrons. 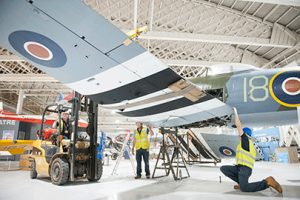