Join in wherever you are on the RAF100 Flypast

On 10 July, one hundred days after the RAF’s official 100th birthday, join them in London for the centrepiece event, the RAF100 parade and flypast. If you can’t get to London you can join in by watching BBC’s iPlayer from 9:30am. 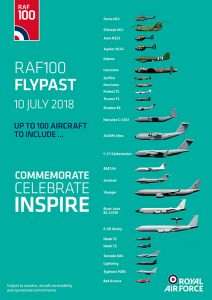 Over a thousand servicemen and women will take part in a parade on The Mall at 11:25.

10:30 – Service of commemoration, remembrance and thanksgiving at Westminster Abbey

At approximately 12:55pm today, the Royal Air Force Facebook page will start a Facebook Live broadcast, which will show the flypast scheduled at 13:00.

Her Majesty The Queen, accompanied by The Prince of Wales, will present a new Queen’s Colour to the Royal Air Force at a ceremony to mark its centenary, on the forecourt of Buckingham Palace.

Then at 13:00 The Queen, The Prince of Wales, The Duchess of Cornwall, other Members of the Royal Family and members of the public will witness the historic flypast where up to 100 aircraft, representing the RAF’s history, will fly over Buckingham Palace.

It promises to be a spectacle never seen before and one that won’t be seen again for a very long time.

HOW YOU CAN TAKE PART

Join everyone on the Mall and experience the celebrations in person and the amazing atmosphere.

Watch live coverage on BBC One from 09:30 to 13:20 or stream on BBC iPlayer to watch the events as they unfold live. Alternatively listen to BBC Radio 2 for further coverage.

Share your photos, videos and comments using the hashtag #RAF100

If you can’t get to London but live in the surrounding area here’s the route that the aircraft are taking in and out of London. So keep an eye (or two) on the skies so you don’t miss out. The RAF100 Baton Relay will also complete its 100 day journey on 10 July. 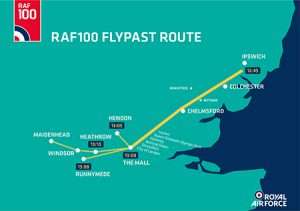 HERE’S WHAT ELSE IS HAPPENING…

Come and see the London leg of the RAF100 Aircraft Tour on Horse Guards Parade (last day today), but if you miss London, there are other tour dates:

There will also be an educational zone focussed on aviation and aerospace activities, designed to encourage interest and participation from young people.

In its centenary year, learn more about the RAF and its iconic aircraft by downloading the RAF100 Augmented Reality Flypast App (click on the image below). 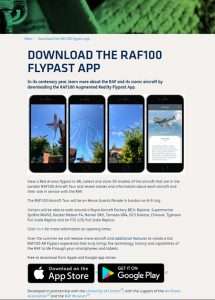 View a Red Arrows flypast in AR, collect and store 3D models of the aircraft that are in the RAF100 Aircraft Tour and reveal stories and information about each aircraft and their role in service with the RAF.

Over the summer the RAF will release more aircraft and additional features to create a full RAF100 AR Flypast experience that truly brings the technology, history and capabilities of the RAF to life through your smartphones and tablets.

Free to download from Apple and Google app stores.

Inspired to join the RAF?

There are so many roles available, as a Regular or a Reservist. The RAF Recruitment website shares further information and an interactive way to get to the roles for you.