Naomi Adie was medically discharged from the Royal Air Force (RAF) in 2014 due to a spinal injury and is using sport as a way to overcome her mental and physical challenges.

Naomi (38) lives in Holme Hale, Norfolk, with husband Stephen (42) and daughter Vesta (9) and will represent United Kingdom at the Invictus Games 2018 thanks to the support of the Royal Air Forces Association (RAF Association).

Having joined the RAF in 2000 as a survival equipment fitter, which included training pilots to ditch safely into the water, Naomi suffered an injury during training which got progressively worse over time, resulting in her premature discharge. 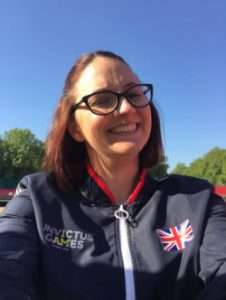 “I hurt my spine in 2001 but I still participated in two tours of Afghanistan. Unfortunately my conditioned worsened and it became too much to carry on and has resulted in me being reliant on a wheelchair to get about sometimes.”

Naomi represented the RAF’s field hockey team between 2002 and 2008. She took up Para ice hockey, travelling one and a half hours to Peterborough to train each week, her aim was to represent United Kingdom at the 2017 Invictus Games in Toronto, Canada.

Unfortunately the sport was not represented at the games but she continues to play for Peterborough and GB Women. Naomi has now switched her focus to wheel chair racing. She said: “I was disappointed that Para ice hockey was left out of the previous games but had it not been, I may not have discovered a love for racing and have the chance to compete in Sydney. I felt it was important to confront some of my anxieties and insecurities and by selecting a solo sport, I have done just that.”

Naomi continued: “I have been asked to captain the athletics team at the games which is an immense honour for myself and my family.”

The Invictus Games are for wounded, injured or sick armed services personnel and veterans. Over 500 competitors from 18 nations will compete in 11 adaptive sports in Sydney, Australia between 20 and 27 of October 2018.

The rollers allow athletes to train indoors when the weather outside is unsuitable and is often used as a tool to warm up and warm down at race events.

She said: “The rollers are invaluable to me, I am unable to train outdoors when it’s raining as the rubber doesn’t grip the gloves and it can be very dangerous. All the top athletes have rollers so I am really thankful to be supported by the RAF Association.”

Rory O’Connor, Director of Welfare and Policy at the RAF Association, said:

“When we heard of Naomi’s story we were very keen to help her.

“We will be cheering Naomi on when she competes at the Invictus Games and wish her the best of luck.”

Looking to the future, Naomi is aiming to become a classified athlete for wheelchair racing and Para ice hockey and has ambitions to coach people in a similar position to herself.

“It has taken a lot of grit and determination to get where I am today. I have set myself a goal and put my all into it. It’s important to show my daughter, by striving for success, that mummy can achieve something despite my physical limitations. I want her to see the person not the disability or injury and this journey is helping with that.’’

For more information about the RAF Association