Proposal at the finish line!

Last Saturday, RAF Corporal Steve Roberts got down on one knee at the finish line of the Bristol Half Marathon and proposed to his girlfriend Jenny Sparrow.

As the couple came over the finish line, completing the run in two hours and 28 minutes, Steve presented Jenny with the ring that he’d been carrying in his short pocket for the entire 13.1-mile run.

Choosing Bristol as the perfect setting was an obvious choice for Steve as that’s where Jenny originally hails from and the city holds a special place in her heart. But Steve admits that Jenny didn’t have much say in the matter when it came to signing up for the race.

“I originally signed up for the race back in March and without giving it much thought signed Jenny up for it at the same time. As you can imagine, I wasn’t the most popular boyfriend.

“But seeing Jenny’s reaction at the finish line was all worth it. When I asked the question it’s safe to say she was shocked. She burst into tears straight away…I hope they were happy tears!”

The pair met at RAF Benson back in 2015 when they were both serving as RAF Suppliers and have been dating ever since.

“The last three or so years have been some of the best. When I first met Jenny, I knew she was ‘the one’ but we’ve had our challenges. Since we first started dating we have both been deployed overseas at different times and that’s hard on any couple.”

The pair were part of an 86-man strong team who all ran the race for the RAF’s leading welfare charity, the Royal Air Force Benevolent Fund, raising more than £11,000.

Steve’s father, Bruce Roberts also served in the RAF as a Supplier, but tragically passed away unexpectedly in 1988 leaving two young sons, Steve who was six, and his brother Danny who was eight, and his wife behind.

The RAF Benevolent Fund stepped in and provided suitable housing for the family, enabling them to remain close to the rest of their family. Steve and Danny were also supported with financial assistance towards their education.

Steve, who is based at RAF Halton, said:

“I’ve been fundraising for the RAF Benevolent Fund for a number of years now. I wanted to join the RAF because of my father’s service. When he passed away suddenly the Fund stepped in to provide support to my family and continued to do so throughout my childhood. They really were a lifeline to us.

“I know my Mum felt really alone at the time and the Fund were there for her, providing practical and emotional support when she needed it the most.”

Last year alone, the RAF Benevolent Fund spent £145,000 at RAF Halton supporting personnel like Steve with a range of issues, from individual grants, to relationship counselling.

Jenny, who left the RAF in July, said:

“It was already an emotional race for us due to the cause we were supporting. The RAF Benevolent Fund have been a huge support to Steve and his family, especially when his father passed away, so coming over the finish line was a build-up of emotions. And then I saw Steve rummage in his pocket and get down on one knee. I couldn’t believe it. It’s all a blur really but I just remember crying a lot.” 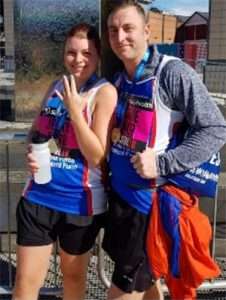 “We are so grateful to the 86 men and women who ran the Bristol Half Marathon for us last week. It’s always so great to see so many people wearing our running vests and this year’s team is no exception, raising more than £11,000 for the Fund! When I found out about Steve and Jenny I was so thrilled for them both, it was such a wonderful surprise and everyone at the RAF Benevolent Fund would like to wish them both a very happy engagement.”