One hundred days after the RAF’s official 100th birthday on 1 April, the RAF has marked 100 years of operations today with a series of spectacular events in London. Here are some of the official photos taken during the main events. If you missed it you can catch up on the BBC iPlayer.

The parade was commanded by Group Captain Anne-Marie Houghton, a Sentry navigator from Headquarters Air Command. Group Captain Houghton has the distinction of being the first female navigator in the Royal Air Force after she graduated from training in 1991.

As part of the event, fifty-five Squadron Standards were be paraded including that of 617 Squadron, famous for its role in the ‘Dambusters’ raids which was recently reformed in 2018 to fly the UK’s new F-35b Lightning II fighter jets. Her Majesty the Queen also presented a new Queen’s Colour to the Royal Air Force at a consecration ceremony. The original Colour was presented in 1951.

The flypast consisted of up to 100 aircraft with nearly 200 aircrew from 25 different RAF Squadrons, operating to and from 14 military stations and two civilian airfields. As well as the pilots flying the aircraft, today’s events will only be made possible thanks to the hard work of aircrew, support teams and Air Traffic Controllers. Their vital role in delivering today’s flypast reflects the fact that over 80% of job roles in the RAF are related to STEM subjects. 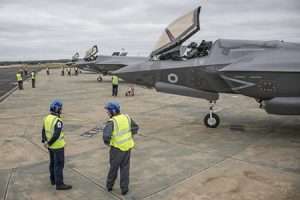 The flypast was made up of the following 19 aircraft, passing over the Palace at 30 second intervals:

The RAF100 website shares more information about the campaign as well as a full events’ calendar, which has numerous local, regional and national events to get involved in.

Show your support for RAF100 on social media during the celebrations by posting about the anniversary and sharing your pictures from events using #RAF100 on the following channels: