Elite teams from the Army, Royal Navy and RAF battled through scorching weather to compete in the annual OA Inter-Services Triathlon at Cotswold Water Park on 26th July 2018. One of our own, Senior Aircraftman Luke Pollard won the men’s race!

Competitors swam through 1.5 km of open water, cycled 41 km of tricky terrain and finished the course with a 10 km run. The high temperatures provided additional challenges.

He plans to return next year and try winning for the fifth time. When asked if he can be beaten, he replied: “You can’t tell the future, but we’ll see.”

This year the Inter-Services triathlon celebrated its 30th anniversary, and to commemorate this special event, veterans participated. These ‘legends’ included people from the original championship.  In addition, guest teams from the Police and Prison Service also competed.

The event is sponsored by the Officers’ Association (OA), and was organised this year by the Royal Navy Triathlon Association.

Lee Holloway, OA’s Chief Executive Officer, said: “We are delighted to sponsor this great Inter-Services sporting championship for a third year. Completing a triathlon requires high levels of physical fitness, mental determination and self-discipline. These are qualities that will support Service leavers when they make a successful transition into civilian life.” 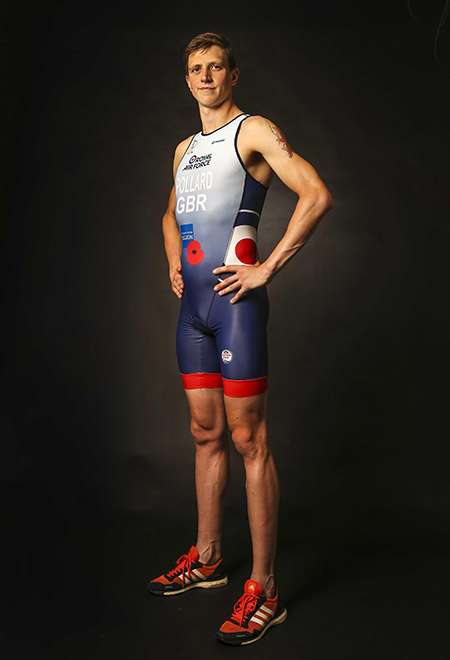 “My training program is quite structured, there are no ‘junk miles’ in there. Every session has a purpose and there is a reason why I’m doing it. On standard training weeks I get in around 27/28 hours of training. Tapping into the University of Birmingham’s triathlon and athletics squads maximises my performance in sessions. It’s hard graft but I’d be lying if I said I didn’t love it!”

Advice to someone competing in a triathlon:

“Be social! Being triathletes we all love a good chat about basically anything. You can find little training or racing gems from people who have been doing this for many years. Plus someone’s always got a good racing story!”

The Armed Forces have some fantastic athletes, and all services are incredibly competitive. It took me three years to take the top spot, but now I’m there I fancy staying a while.