Last Saturday, sisters Eryn and Brooke Smith took part in a one-mile obstacle course mud run in memory of their beloved uncle Corporal Jon Bayliss who was killed while serving with the RAF Red Arrows earlier this year.

The youngsters have raised funds for the RAF Benevolent Fund after the charity stepped in in the immediate aftermath of Jon’s death in March this year. Jon, who was an RAF engineer, was killed when the Hawk he was flying in crashed at RAF Valley.

“We had so much fun doing the Mini Mudder race. It was quite hard, and we got covered in mud, but I made sure I helped Brooke along the way. Lots of people have sponsored us which is nice because we wanted to do something good in Uncle Jon’s memory.”

“We are so proud of the girls for taking part in their Mini Mudder. It was so lovely to watch them complete the course together and really help each other out along the way. The girls really miss their Uncle Jon, he was a big part of their lives and always made them smile. They wanted to raise money for the RAF Benevolent Fund because they knew how much they helped our family when we had that awful news.”

“I had a lot of fun doing the Mini Mudder. My favourite bit was the mud pit, we both got covered in mud, but my sister helped me when I had to climb up the ramp, which was really difficult. We painted our faces before the race and had a red arrows transfer on our faces for Uncle Jon.”

The RAF Benevolent Fund has stood side by side with the RAF for almost 100 years, supporting personnel past and present whenever they are in need. Last year the Fund spent £18.8 million providing support services like its Airplay youth scheme for young children growing up on RAF stations, as well as financial grants allowing young veterans to transition to civilian life smoothly or providing care home top-up fees ensuring elderly veterans living out their retirement in comfort. 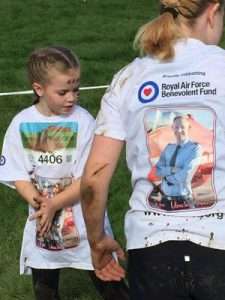 “What fantastic little girls, Eryn and Brooke both are. We are so grateful that they chose to support us with their Mini Mudder challenge. Being able to step in and support families who are dealing with the devastating loss of a loved one is just one of the ways the Fund is there for the RAF Family, and has been for almost 100 years.

“Congratulations girls on completing your fab challenge. I’m sure your Uncle Jon would be very proud of you both.”

You can sponsor Eryn and Brooke