The Millies congratulated winners for feats of courage and sacrifice with a glittering awards ceremony at Banqueting House.

In their eleventh year, the awards provide the public with an opportunity to recognise the excellent work and outstanding achievements of our Service personnel over the last 12 months.

In recognition of their work decontaminating Salisbury of the deadly nerve agent, Novichok, the Joint CBRN Task Force were awarded the ‘Hero at Home – Unit’. Specialist personnel from the RAF Regiment worked tirelessly alongside colleagues in the Army to remove the deadly nerve agent from contaminated sites following the attempted assassination of Sergai and Yulia Skripal and the tragic death of Dawn Sturgess.

In addition, the extraordinary effort of RAF Whole Force to deliver the RAF100 campaign in the Service’s centenary year was recognised with the ‘Judges’ Special Recognition Award’. 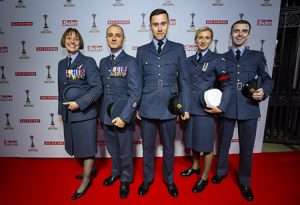 “Very proud to accept for RAF, the Judges’ Special Recognition Award at the Millies. An exceptional way to mark the end of an outstanding RAF100 year for the whole RAF family.”

In recognition of his work in the conservation of a vital part of the Service’s history, WO Gary Edward was nominated in the ‘Best Reservist’ category. Instrumental in conserving of the century-old First World War training trenches at RAF Halton, his work preserving this unique facility for the education of future generations showed a selfless devotion to the history of the armed forces and their role at key moments in history.

Wg Cdr Gatland was nominated in the ‘Inspiring Others’ category for his and his team’s work in producing the RAF 100 flypast. The largest concentration of military aircraft seen over London in recent memory, the remarkable display was a highlight of the RAF’s centenary year.

Nominated in the ‘Innovation’ category was Carbonite 2, the first satellite of its kind to be used in Defence. Created in collaboration with the RAF, the Ministry of Defence’s chief scientific advisor, DSTL and partners in UK industry, Carbonite-2 provides high quality imagery, improving the RAF’s situational awareness.

“It was a great honour to attend The Sun Military Awards and congratulate so many of the winners and nominees in person. The incredible stories told tonight show how our armed forces protect British people and our interests at home and abroad.”

Also recognised at the awards was the continued work and excellence of RAF personnel (story image) protecting the UK at home and overseas on operations.

In recognition of their vital role in two crucial commitments to international peace and stability, 31 Sqn were nominated in the ‘Hero Overseas – Unit’ category. The Sqn worked alongside engineering teams, Voyager air-to-air refuelling fleets, and foreign allies to deliver UK’s contribution to the Global Coalition against Daesh and strikes against the Assad regime in Syria following the use of chemical weapons against Syrian nationals.

RAF Mountain Rescue Service, who this year celebrated their 75th anniversary, were nominated in the ‘Hero at Home – Unit’ category. The service is on call 24 hours a day, 365 days a year and provides all-weather support to support civil authorities in the UK and overseas, reflected in its motto: ‘Whensoever’. Recent deployments include work in Borneo, Albania and Alaska, where the service helped rescue military personnel.

“It is a great honour for the MRS to be nominated and short listed for this prodigious award, especially in our 75th year of continuous operations. As the only all weather search and rescue capability in the UK military, we are immensely proud of our heritage and the personnel who have committed their time to this important service.”