The company has also developed a new work placement scheme that offers current Armed Forces personnel, who are close to finishing their military careers, a chance to try a job at Travis Perkins before making a full-time commitment.

To provide added support, Travis Perkins is also tailoring their apprenticeship programmes to create a specialist Ex-Military Training Curriculum with a focus on up-skilling former military employees in commercial and customer service skills to ensure they are ready to face the new and exciting challenges a career outside the military will bring.

Since 2015, Travis Perkins has developed a proud tradition for recruiting service leavers, which now total more than 200, who serve in roles spanning branch management, IT, supply chain and logistics. Last year this work was recognised with a Defence Employer Recognition Scheme (ERS) Silver Award. 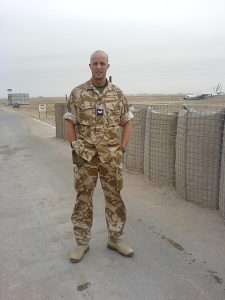 To oversee the group-wide initiatives designed to help former military personnel find work after they leave the Armed Forces, Craig (pictured above) has assumed the role of Specialist Recruiter and brings over 22 years of experience from the RAF, where he spent the last four years of his time working to help the next generation find career opportunities within the Armed Forces.

In line with the Armed Forces Covenant, which Travis Perkins signed last year, Craig is also working to help support the partners of former military personnel.

Craig commented on his new role:

“I am immensely proud to be working with Travis Perkins and to be playing a part in their incredible commitment to help support and recruit Armed Forces leavers. As a former RAF Sergeant, it is brilliant to be in a company that values the skills, experience, professionalism and dedication Armed Forces personnel can bring to business.”