[Thursday 24 January 2019] The RAF Benevolent Fund was shocked and saddened to see the Bomber Command Memorial in London’s Green Park had once again become a target for vandals, for the fourth time in six years. At daybreak on Monday 21 January, it was discovered that white gloss paint had been thrown across the entire Memorial, including the statue of seven Bomber Command crew members which stands at its centre, the marble plinth it stands upon and the surrounding Portland stone.

Phase one of the cleaning work has now been completed and the Bomber Command Memorial has now been re-opened for the public. Phase two, which includes spot cleaning the remaining paint and re-sealing the bronze statue, will be carried out over the coming weeks. It is anticipated that the cost of repairs will be in the region of £2,000 but due to the extensive damage this may vary. 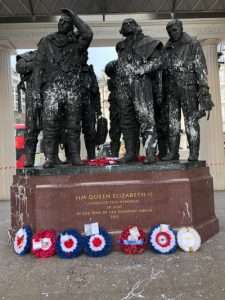 As this is an on-going police investigation, any queries relating to CCTV stills and footage must be directed to the Metropolitan Police.

“Following the shock of discovering the senseless vandalism which has defaced this tribute to the 55,573 Bomber Command members who lost their lives, we have been overwhelmed and heartened by the public reaction. We have received thousands of messages of support and donations totalling almost £19,500 which will be used for the future maintenance and security of the memorial.

“While we have been heartened by the public outcry following this attack, it is a shame this act of vandalism has turned our attention away from our mission of supporting those RAF veterans who need our help.

“The RAF Benevolent Fund is proud to be the guardians of the Memorial, ensuring the legacy of these men is remembered for generations to come and ensuring the sacrifice of the few will always be remembered by the many. It is vital we honour the memory of the fallen with Memorials and Museums to bring this heritage to life, it is the least we can do to repay the debt we owe.”