Women in Defence – the Chief of the Air Staff’s perspective 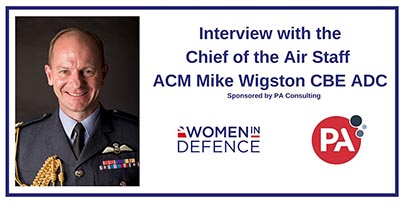 We are excited to announce additional tickets are available to attend an exclusive Women in Defence UK virtual interview on Tuesday 2nd June, with Air Chief Marshal Mike Wigston CBE ADC, Chief of the Air Staff for the Royal Air Force from 6pm to 7.30pm.

Hear the Chief of the Air Staff’s perspective on the different types of leadership required during the current crisis, what effect it’s had on behaviours and culture, how ways of working have changed and how that could affect future policies, and how all of these topics might relate to women who work in the Royal Air Force and wider defence.

The evening is made possible by our Founding Partner, PA Consulting.

Sign up by to secure your place now, and prepare to be impressed and inspired by the work the CAS, and the Royal Air Force, are doing for women in the sector.

This is a virtual event and tickets are free of charge.

These events are usually chargeable. In times of social distancing a great deal of hard work is taking place to increase both the number and variety of virtual events in the programme. There is no charge for a ticket for this event. Should you wish to make a donation it will help the hosts to run more virtual events like this, please select the ‘Donation’ ticket.

More information on joining instructions will be provided before the event.

Please note: a waiting list is being operated for this event. If you find you are unable to attend, please let us know as soon as possible so that others on the waiting list can take your place. Your donation is refundable up to 1 day before the event start date.

Mike commissioned on a University Cadetship in 1986, he completed his pilot training on the Tornado GR1 in 1992 followed by a succession of frontline tours, including operational deployments enforcing the no-fly zones in Iraq. He commanded 12(Bomber) Squadron, flying the Tornado GR4 and leading the Squadron on two operational tours in Iraq and large force exercises in Canada, Malaysia and the USA. Appointments in operational headquarters have included Al Udeid Airbase, Qatar, as the Chief of Combat Operations in the Combined Air and Space Operations Centre; Basrah International Airport, Iraq as Commander 903 Expeditionary Air Wing; and one year in Afghanistan as the Director Air Operations in Headquarters ISAF Joint Command. He was appointed CBE in 2013 for his contribution to that mission.
Staff appointments in the Ministry of Defence have included the Operations Directorate and the predecessor to what is now Military Strategic Effects. In 2013, after a short spell as the Tornado Force Commander, he became the Principal Staff Officer to the Chief of Defence Staff. In January 2015, he was appointed Administrator of the Sovereign Base Areas of Akrotiri and Dhekelia and Commander British Forces Cyprus, responsible for the civil governance of the Sovereign Base Areas and command of British forces based permanently in Cyprus.

Education and training includes: reading Engineering Science at Oriel College, Oxford; the Advanced Command and Staff Course; an MA in Defence Studies from King’s College London; the Higher Command and Staff Course; and the UK Pinnacle Course. He is a Vice Patron of the Royal Air Force Charitable Trust and President of the Royal Air Force Rowing Association.