‘You’re amazing’: Armed Forces send a surprise message back to loved ones in Valentine’s video

The Armed Forces charity SSAFA has teamed up with the Royal Navy and the Royal Air Force to arrange a special rendition of Bruno Mars’ hit song ‘Just the Way You Are’ in the lead up to Valentine’s Day.

Acknowledging the thousands of military families living apart, often for weeks at a time, SSAFA, created the ‘top-secret’ music video to help bring separated loved ones closer together this Valentine’s Day.

The video was filmed at the Royal Navy Air Station, Yeovilton and RAF Brize Norton. Featured in the clip is Flight Lieutenant Kurt Baldwin, a C-17 pilot based at Brize Norton, who proposed to his wife on Valentine’s Day in 2012.

“It’s always tough being away from home and apart from my wife and children, but especially so on days like Valentine’s Day when you’re surrounded by chatter about love. My wife will probably roll her eyes and cringe at the sight of my dance moves, but I don’t mind. As long as it gets a laugh and a smile from her, I’m happy.” 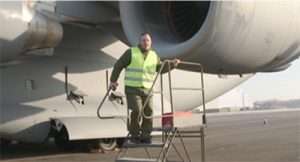 “I jumped at the chance to send a special Valentine’s Day message to my wife and three beautiful daughters as it’s a real family occasion for us. I’m grateful to not be away this year – but I’m hoping this video makes up for all the other special moments I’ve missed in the past.

“As childhood sweethearts and me being in the RAF since school, there have been many times I’ve been away from home, four months being the longest. Time can really drag sometimes, and I’ve felt helpless knowing my wife is looking after the entire family at home alone.”